I Built my own PC!

Chalk up another accomplishment during the COVID-19 pandemic lockdown. At the beginning of the pandemic I made the plunge in deciding to use Linux full-time. Well, after 8 years, my trusty ASUS ROG G46VW laptop bit the dust. Performance had been bad for some time, and I attempted to replace the battery. Bad Decision! I did not realize that replacing a laptop battery would be akin to performing open heart surgery. After stripping a screw on the monitor mount, I decided it was time to buy a new PC. But why buy one pre-made when you can build your own?

So on the advice of a friend, I decided to plunge into building my own PC. I was originally looking at the System76 pre-built Linux computers running Pop! OS to purchase prior to deciding to build my own. Judging from their Thelios desktop server PC model listed for sale on their website, I saved about $500-600 by building a PC with the exact same specs and exact same operating system, but got much more system storage, a lot more USB ports (11 versus 3), and a much more form-fitting factor build. I wanted something that was portable enough to move around and didn't take up a lot of space. I knew I wanted an AMD GPU and an AMD Ryzen CPU. I did not want an NVidia GPU after reading the constant issues that they have on Linux with their drivers. Then, armed with only PCPartPicker, I decided to start playing around with the different types of parts. I started playing around with different part combinations, and read a bunch of Reddit comments, part reviews, and Youtube videos to see what would be optimal parts to purchase. I didn't really go into it for the most bang for your buck build. I had a price ceiling that I didn't want to go over, and already had a USB mouse, a USB mechanical keyboard, and a monitor. There are so many options for PC parts out there, that it can be daunting to figure out what your needs are, and what goals you are trying to accomplish. I'll be honest, looking back I really did not know what I was doing for most of this process. After seeing which motherboards were compatible with both AMD CPUs and AMD GPUs, I landed on the ASUS Republic of Gamers Crosshair VIII Impact Mini-DTX board, which is apparently more of a premium motherboard for more powerful overclocked CPUs like the 3950X in small cases like mine, but I didn't quite know that at the time. I had read online that the NCase M1 was by far the best small form factor PC build case, and I found an M1 V2 used on eBay for exactly the same price as one would purchase new. It had some slight wear to it, but overall served my needs quite well as it was very easy to build my first PC in. I also got a really cheap $25 USB webcam with camera and microphone that needed no drivers for all of my online classes and meetings, it has worked great. While I don't game much anymore, I figured I would go for parts that would last long. Apparently, I spent a little too much on the motherboard, but all learning experiences have bumps in the road. My savings versus purchasing a computer and the flexibility contained within I thought made it worthwhile.

Here is what I ended up with:

Now for the interesting part! My first foray into the process. Thankfully, the overall process was both challenging and fun, yet not too nervewracking. The manual that came with the motherboard was extremely straightforward, and there were a few settings on my motherboard that allowed me to pinpoint problems when things went wrong. For example, a light on the motherboard on bootup shows an orange light when the RAM is faulty or not seated properly. It pinpointed the issue that one stick was completely faulty upon purchase. There were times where I thought I might have broken something, particularly when I first assembled the entire laptop only for nothing to have powered on! Turns out I didn't put the motherboard cable quite fully into the power supply. The power supply cables were quite a bit tough and inelastic, but overall everything managed to fit into the small form factor build. I found the ability to snap on and snap off the sides and top of the NCase M1 made tweaking it and fixing things that were wrong extremely easy, as well as fitting the parts in. Some other things that went wrong:

The most difficult thing by far with regard to building the PC was installing the cooler. Some online stated that the stock cooler was worth using, the AMD Wraith Spire Cooler that came with the CPU I purchased. Others said stock coolers were always junk. I figured to save money I would try to use the stock cooler. However, though my idle and load temperatures are very good, I noticed that the Ryzen CPU depending on the type of action occurring (For example, resizing an image in BlueGriffon while making this web page) causes high fluctuations in temperature when first opening programs. This will cause the fan to automatically kick in. And if you use the Stock Wraith cooler of the AMD CPU, it will make a LOT of noise on these CPU spikes, turning the cooler into a sort of high sound seesaw.

After a week or so, the sound of fans revving up and slowing down became aggravating to listen to. On first build I thought it was my fault, that I had misapplied the thermal paste to the CPU. Turns out the cooler already had thermal paste on it the first time and I had accidentally wiped it off (whoops!) According to some forum threads though, the spikes are normal for the AMD CPU because of the style of CPU. However, not wanting to be bothered by the constant revving up and slowing down of the fan when I was doing just about anything, I went with the $60 Noctua NH-U9S cooler. What a difference this made! Not only did my idle temperatures drop by a couple of degrees celsius, the fans were downright silent, even on the higher speeds. Right now my CPU idles at around 35c with the "temp1" collective temperatures a little higher at about 39. However these temperatures have been as cool as 32c, even though the case is small. Both the Noctua fans and the NCase M1 are an excellent combo for case temps. On load, I usually get a temperature playing games of around 69-70c.

By far the coolest thing was the SO.Dimm2 expansion card that fits two M2 solid state drives. Seeing the new solid state drives no bigger than a stick of gum really blew my mind. It was less than ten years ago when everyone was still using the huge 3.5 spinning disk hard drives. I initially ordered the wrong kind of solid state drive thinking they were all the same, but ended up fitting it in the case as well. So I still have room for a second M2 drive down the line, and potentially another regular kind of SSD as well. Lots of room on this motherboard for expanded storage!

Flashing the new BIOS onto the existing motherboard was also extremely easy using a USB drive and the BIOS flashback port. I plan to have these parts for as long as they'll go for, I'm hoping they will last at least 10 years. Eventually I want to upgrade to 64GB of RAM when I have enough money, but for now 32GB will do the trick.

Here are some pictures of the final build. 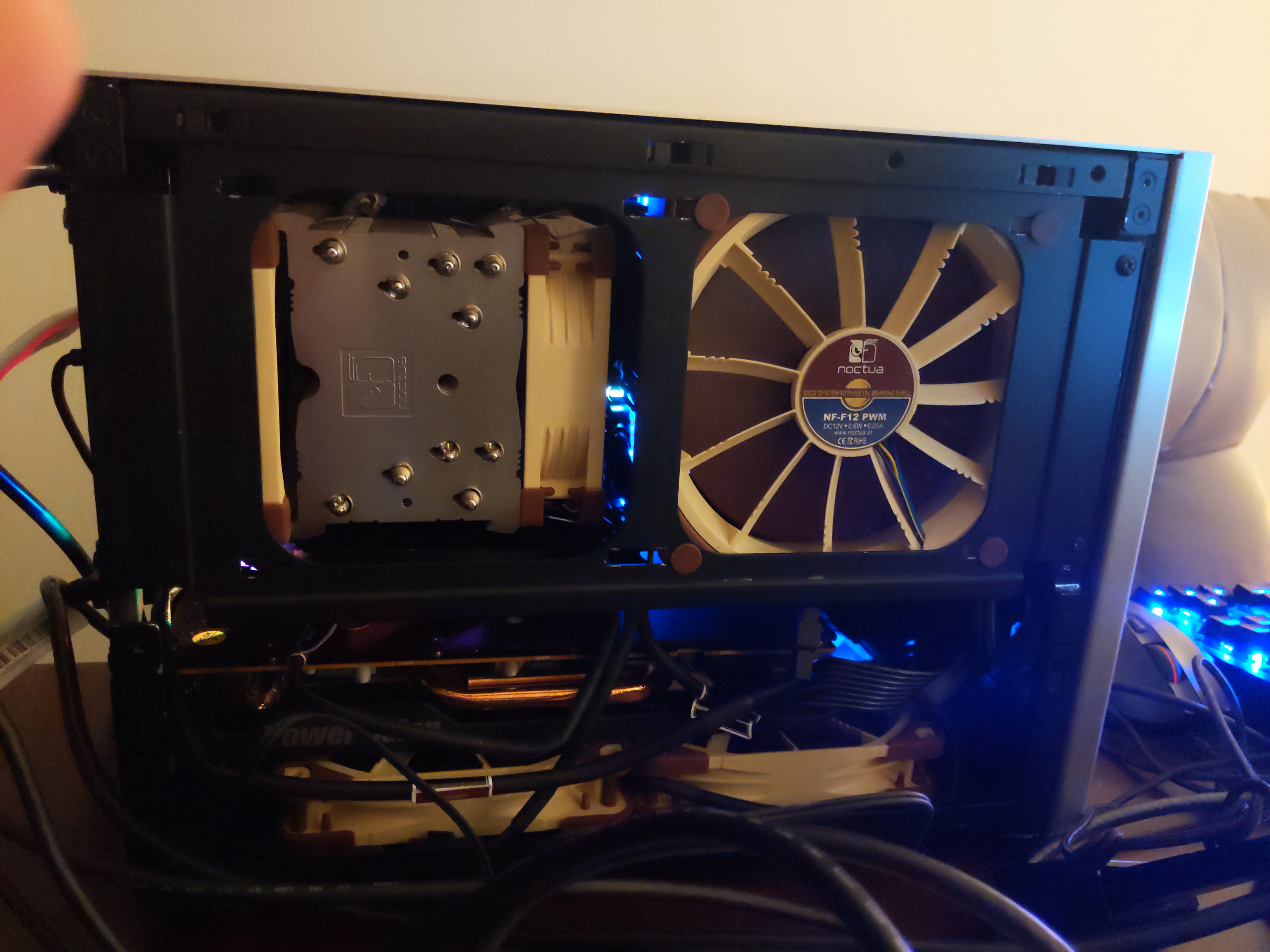 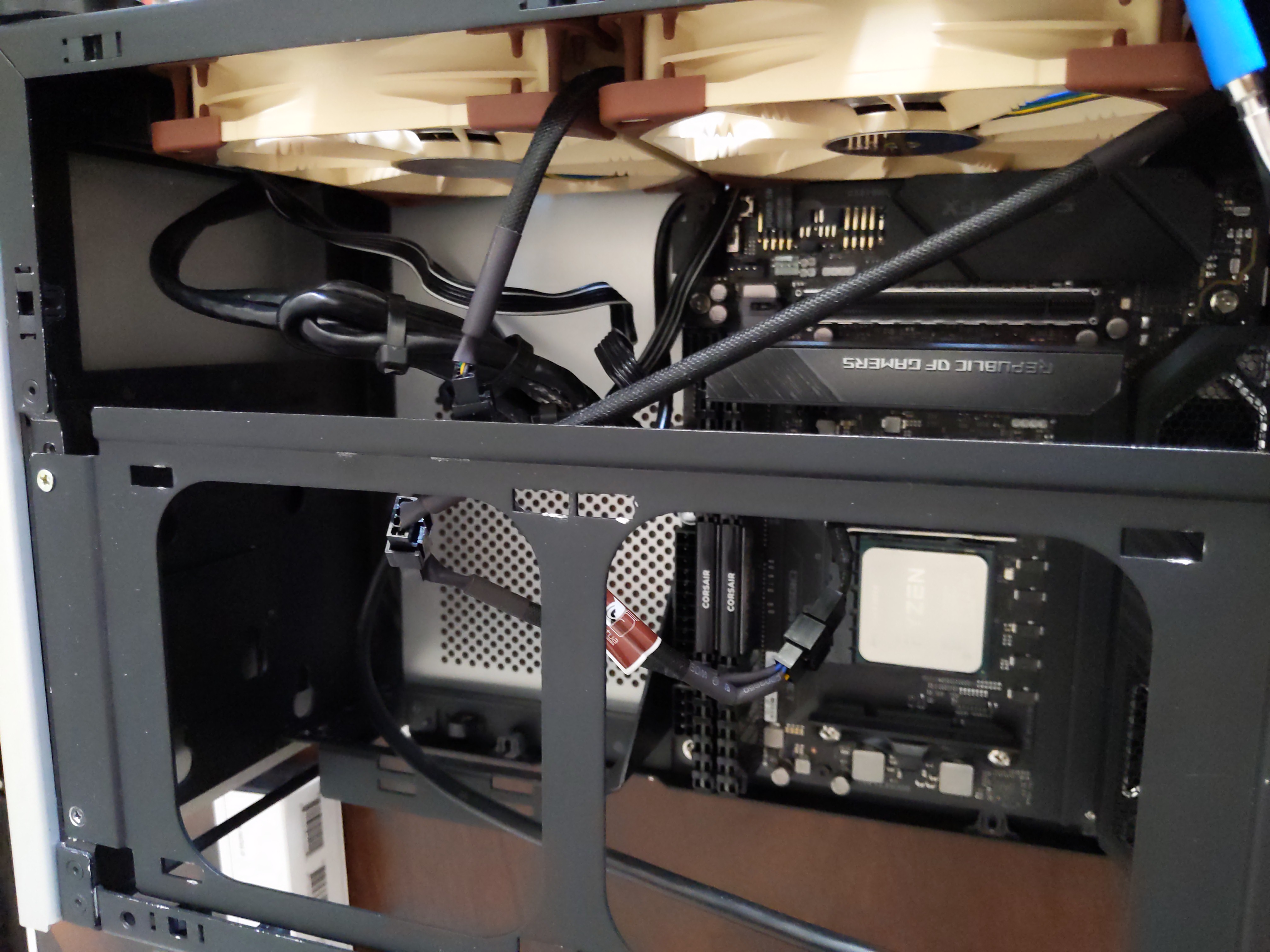 After using Debian for the last year or so, between dual-booting and then full-time, I thought I might go with Debian once again. But in a Linus Torvalds moment, I could not install Debian on my brand new machine! Using the Debian Testing Netinstaller non-free ISO, the ISO said I was missing firmware on the CD (what?) So I realized that Debian was not the way to go for a Desktop distro, and after running into previous bugs, glitches, old packages, missing packages in the repo, and dependency hell, I knew I needed to try something different. So on the recommendation of EMH-Mark-I I decided to go with Pop! OS by System76. Pop! is by far the smoothest version of Linux I have used yet. Based on Ubuntu, but containing its own package manager, does not use Snaps, and uses its own special designed version of GNOME, Pop really gives a lot more leeway to the new Linux user with regard to not having to always use the command line or hunt down different repositories and packages. Their collection of repos using Ubuntu, Flatpak, and Pop's specially cultivated repo really give a lot of programs in their newest versions available for both power users and regualr users who don't wish to tinker. Pop encrypts the hard drive at the base level which protects your data and requires a password at bootup. It also has a neat feature that allows you to reinstall the system but save the home folder should anything go wrong with your system. After attempting to build my own library for a program, I did this and was able to pinpoint the issue. Really just a very well-done Linux distro, and in a few years I can see it dethroning Ubuntu for the top spot.

By far the most difficult part of my system install was getting the Optical drive to work. I bought a Blu-Ray drive that was recommended specifically for this case, despite PCPartPicker stating that it would not fit. After getting the right conversion Slimline Sata to Sata cable to plug into my motherboard and power supply, the optical drive fit like a charm right in the front panel of the NCase M1. I was excited to have a Blu-Ray drive, thinking I could take advantage of playing Blu-Rays on my new system as I have never owned a player. However, running Blu-Rays is quite difficult on Linux as I have found out. I will probably write a more full guide later, but getting both DVDs and Blu-Rays to run is a little bit of a challenge.

For DVDs, you will need two packages.

And of course, as laid out in my Retro GUI guide, I was still able to install XFCE and Chicago95 without issue, as well as use Pale Moon and Interlink Mail & News. Everything looks and runs great on my new system! 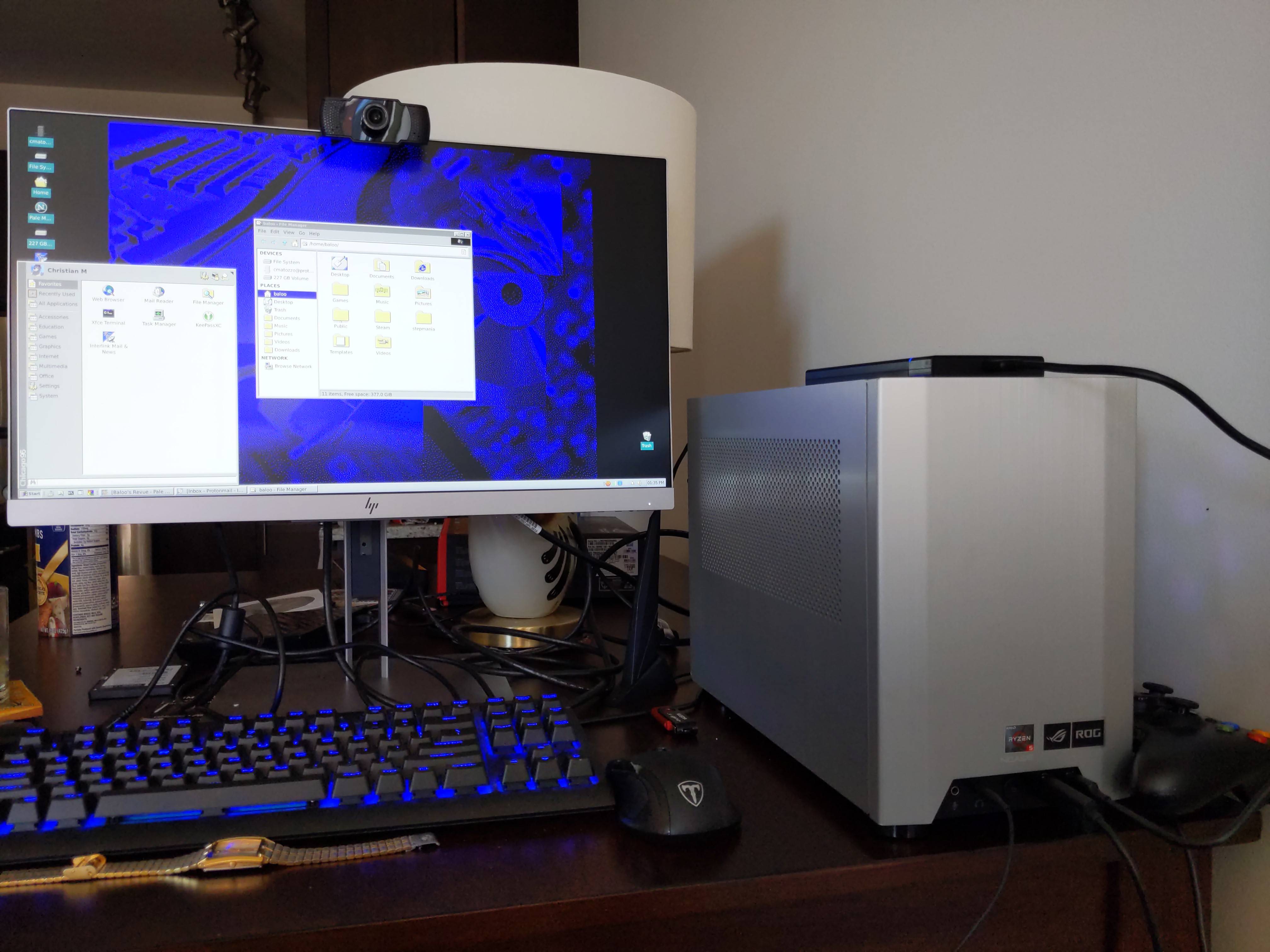 Overall, now I have my new PC! Thanks to Joe, Saurabh, and all of my friends in #binaryoutcast on Freenode: EMH-Mark-I, athenian200, Matt A. Tobin, Colt1911, and Some_Person for all of their advice and help when things went wrong!

Back to the Blog.